The North Yorkshire youngster shook off an unlucky outing at Brands Hatch two weeks prior with a determined display in the fifth and sixth races of the season at Oulton Park, held in difficult and changeable weather conditions.

The Redline Racing driver carried his Ice Driver experience from the frozen lakes of Norway over into the weekend in Cheshire, and looked to start strongly in Saturday’s qualifying session held in wet conditions.

Backed by sponsors including Eighty One Powerdrink and Rocket Medical, the 18-year-old started strongly by topping the times in the wettest conditions before times began to tumble in the final minutes, McKenna eventually grabbing seventh on the grid in a late flurry of changes.

A good start in the opening race of the weekend later that afternoon put the rapid Porsche rookie ahead of Ross Wylie into sixth place when the lights went out, chasing a three-car dice ahead of him for the final podium spot.

Fighting a damaged Porsche 911 GT3 Cup car and evading an incident ahead, McKenna came home sixth overall to narrowly miss out on another rookie class podium, something he aimed to put right in Sunday’s race.

In front of the ITV4 cameras alongside the British Touring Car Championship, a partially-reversed grid shifted McKenna’s #82 Porsche onto pole position for the 15-lap second race.

A strong start in wet conditions kept him ahead of team-mate Matty Graham, and for two laps McKenna held his nerve at the head of the field. Former champion Josh Webster moved ahead at Old Hall on lap three, but McKenna held his own by retaliating on the outside briefly when eventual winner Harry King attacked for second spot at Druids.

McKenna settled into a solid third spot, surviving a late safety car interruption to hang on and secure a hard-earned second podium finish of his rookie season in only six races, adding to his Donington rostrum visit in Round Two.

McKenna also took his third rookie cup win of the season to move to within 10 points of the class lead, sitting fifth in the overall Carrera Cup GB standings and only three points adrift of third place. The Stokesley man next heads to Knockhill in Fife this weekend (29/30 August) for the latest pair of races.

Sunday’s races will be broadcast LIVE on ITV2 in support of the British Touring Car Championship.

Scott McKenna (#82 Redline Racing):
“I’m absolutely buzzing to be back on the podium again. Brands Hatch left us a bit disappointed through no fault of our own, and on Sunday we showed what we could do and got back to how we felt at Donington.

“Through my work with Ice Driver I know what it’s like to drive a Porsche in tricky conditions, and we were on the limit trying to keep in the fight towards the end when it was so greasy. We had damage on Saturday which held us back, but the reverse grid gave us the chance to recover. We showed our pace during Sunday’s race and I’m delighted with the result.

“A massive thanks to the guys at Redline and all of those backing and supporting me, and we’ve got to kick on now and believe that we can be the ones to challenge for the top three again in Scotland which is a tight and exciting track to visit.” 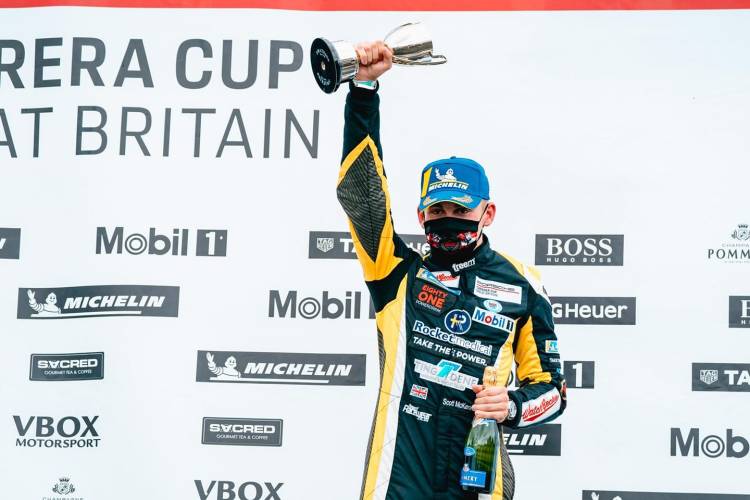